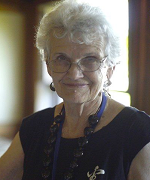 began studying bodywork and process at Esalen Institute and at the Gefion School in Berkeley, CA in 1971. She continued to study and work with a number of pioneers in awareness-based bodywork and process, including Dick Korn of the Berkeley Institute of Psychodrama, Peter Levine, Ph.D., founder of Somatic Experiencing, Dick Price, co-founder of Esalen Institute, and Christine Price, founder of Gestalt Awareness Practice. She studied with Dr. Milton Trager, originator of TRAGER® Psychophysical Integration and MENTASTICS® Movement, from 1975 until1997, and has worked as an Instructor in the Trager Institute’s professional training program from 1980 until the present. In 1983 she founded reSource, a school for bodywork in Berkeley, California, which she directed and where she taught for fifteen years. Currently she leads groups in Gestalt Awareness Practice and the TRAGER Approach. She maintains a private practice in Berkeley, California.