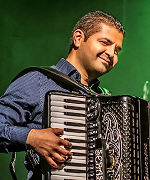 gifted Roma clarinetist and multi-instrumentalist. Nehrun comes from a musical family in Turkish-speaking Macedonia. Already as a child he accompanied his father Marem Aliev musically at weddings. When he was four years old Nehrun began playing the darabuka and soon other instruments followed: piano, clarinet, keyboard, accordion, tapan (traditional drum) and kaval (traditional flute). Together with his father he is the founder of Aliev Bleh Orkestar. He had over 1000 performances with his band SsaSsa.

Gypsy on the Mountain

with Monique LANSDORP and
Michael HOROWITZ and
Nehrun ALIEV